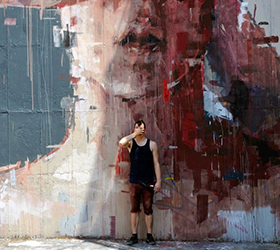 Gonzalo Borondo was born in Valladolid in 1989 and soon moved to Segovia, where he spent his childhood. In 2003 he settled in Madrid and began to experiment different artistic techniques in public spaces. The street became Borondo’s privileged place of expression, where he communicated and created a strong relationship between space and those who live it.

In 2005 he began to attend the workshop of the painter Jose Garcia Herranz, where he started exploring the possibilities of painting techniques and studied the old masters. In 2010 he was invited for the first time at a public art festival in Istanbul and started to work on large wall surfaces. Since then he has completed numerous public art projects around the world: urban installations and walls born from a dialogue between the environment and the physical spaces where he works. Since 2012 he has presented exhibition projects in galleries and museums all over Europe, including “Animal”, his personal exhibition in London in 2015, which consolidated the artist’s inclination and will to create a dialogue between different media and techniques.