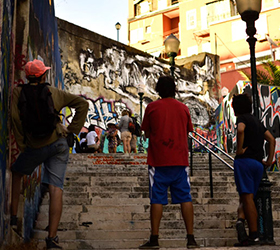 Canemorto is a trio of Italian artists that like to keep their identity hidden. Active since 2007, during the past ten years they have created works in Europe that stand out for their raw and brutal style.

The personal imagery of Canemorto mixes graffiti to the worship of an evil deity, which influences the work of the group and their choices. In 2015 Canemorto produced and published the feature film “Te Amo-Lisboa | An ignominious street art movie”, which went around the world, stimulating reflections and opening debates. The same year they exhibited in the itinerant show “Eterotopia”, presented in Rome at the Ex Dogana and Palazzo Fazzari in Catanzaro.

In 2016, the trio produced “Toys”, a solo exhibition at the historic Viafarini space in Milan. In 2017 Altrove Gallery presented a new set of pictures by Canemorto, together with works by Carlo Zinelli, a historical representative of Art Brut, in the exhibition “Carlo giallo su sfondo di tre cani”.