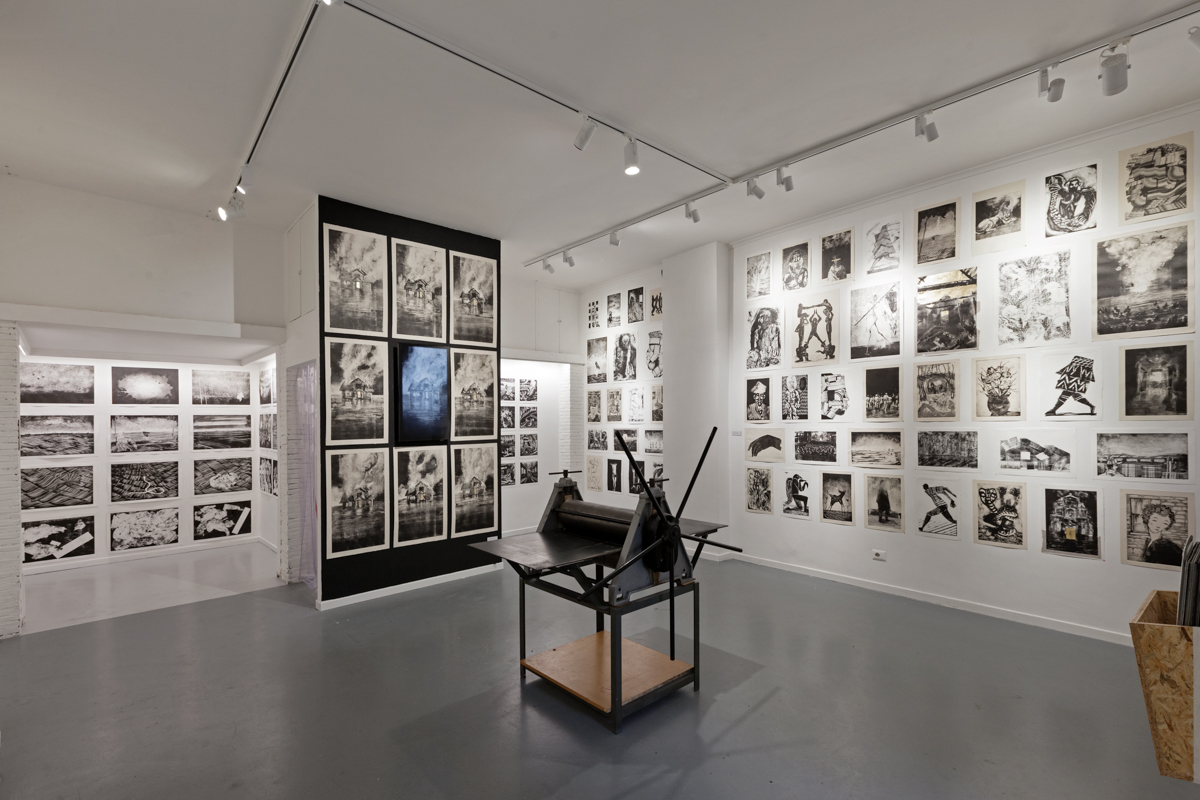 C: ”Colera” is a project that started in 2105 when you all were by chance in London. Can you tell us something about your London experience and how the project for Galleria Varsi started?

R: We were not there by chance; it was a sign from God and since I believe in signs, miracles began to happen…

C: The experience started in Servadio’s workshop in Hackney Wick, where we regularly met to get away from English weather.Spontaneity and improvisation were at the basis of those long print runs, where our only goal was to have fun and influence each other. At each session more friends came in, along with any other artist or anyone who wanted to stop in and have fun; our only request was that everyone had to print something and hang it on the walls. Only towards the end of our stay in London we began to think of creating a show from the products of those psychedelic nights. The project for Varsi was born to remember that experience, with the challenge of developing it in a totally different context from that of three years ago. 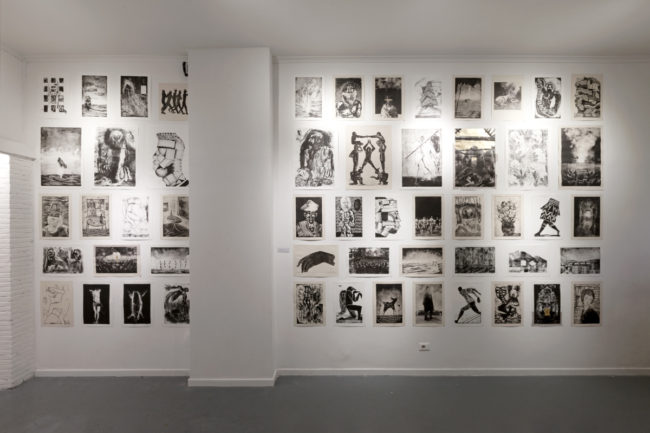 B: The process was quite natural and organic. Michele has a press; we liked to experiment; we tried it out one day and liked the results; we had many beers …; and then we decided that we would dedicate one day a week to this research.

S: “Colera” is the right word to describe what my workshop looked like after the group printing sessions. The viscous oil-based ink left traces of its passage over all surfaces; we wore no gloves and happily rotated turns at the press, all wanting to experience a new technique.
We did a lot of printing sessions and the core of the group will be at Galleria Varsi. There were also satellites of people who participated to those evenings: whether artists or not, all who were there had to print. We produced an incredible amount of work that deposited on each surface of the study, as if it had snowed sheets. From this comes the choice of fully covering the surface of all gallery spaces.

C: Which one of the possibilities offered by monotype fascinates you and how do you create a dialogue between your poetic imagery and your chosen means of expression?

S: I like the randomness of the technique and the speed of execution of monotype. When you lift a sheet from the plate, you always get a surprise. It is similar to cooking a quick recipe: you throw things in a pan and taste them. Very few ingredients and gestures all approximated. Any object or piece in it can potentially become a perfect tool to create unusual textures; this makes you keep your eyes open, and is a continuous stimulus. Monotype is definitely not a boring technique; it is empirical and it adjusts and complicates things every time you introduce a new variant.
Texture is a fundamental part of my work; both with tattoos and the press I work on skin. I am not a great planner, so the spontaneity of monotype helps me stir up fresh ideas, which can be reused in other areas such as painting or tattooing. For me monotype is the perfect tool to generate a creative feedback compared to the other media I use in my artistic practice. 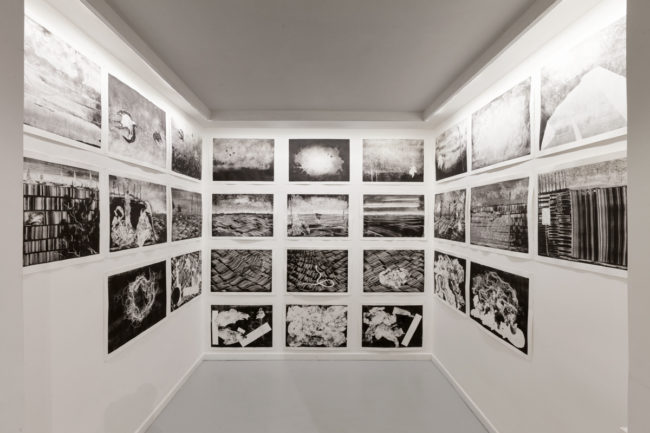 R: The beauty of monotype is that makes you see the limit. Contrarily to what we are led to believe, it is not always possible to control what happens in our lives.

B: I am interested in chance, the uncertainty that goes beyond what the artist’s hand controls. What can be interpreted as a “mistake” may instead lead to surprises; these are always very exciting, though sometimes they can become frustrating as well. We are used to control everything; however in monotype you have to accept limits.
I like the idea of getting involved in a technique that I don’t know well and that I don’t know where it will take me. The most interesting thing to do when you walk in an unknown place in the countryside is to leave the beaten path and accept the uncertainty that comes from lack of control over what is around you, with the insecurity of not knowing the way.

C: Monotype is an immediate and instinctive technique, which allows us to work freely and without hesitation. This perfectly suits to our means of expression and is well fitting for a collective project.

C: What common traits do you have with the other artists in the team?

B: From my point of view, rather than an aesthetic connection there is a kind of understanding that we all share in how we live our lives as independent, strong and free people … plus a lot of friendship.

R: We all like ketamine and spaghetti with tomato sauce. I am joking: we are bound by a mutual friendship that was probably born around a press. We are colleagues and we share a common world that each one of us manages their own way. I think we also inspire each other, absorbing ideas and feelings like sponges in a drawer. With the exhibition we will open this drawer and see what is inside. 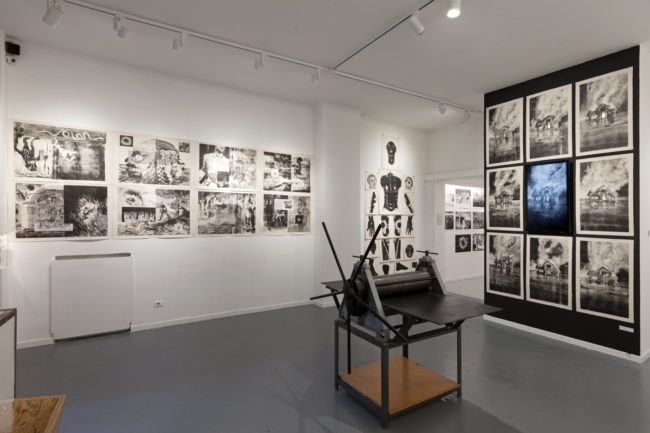 C: In addition to the friendship that binds us, all of our work explores the human figure through a research for a very personal sign. What we really have in common, rather than aesthetics, it is a tendency to mix languages and different media, ranging from drawing, painting, sculpture, installations, video, music, tattoos …

S: The organic nature of the subjects, such as bodies. They start really raw with Canemorto, you adjust the forms a bit with me and they become perfect with Gonzalo, plastic with Giacomo, and then are destroyed again with CM; it is a circle.

C: You have taken quite some time to choose the title of the exhibition. After endless (and crazy!) e-mails, you went back to basics and chose “Colera”. Why this word?

B: Because it was the one that everybody liked and because sometimes going backwards is the right way to proceed towards the future.

S: For me it well reflects the vibes of the London print runs. It is also a little ironic but not too much, and so I like it. We had to try them all to figure out which was the right one. On top of the technical difficulties in our email communications, it took us a while because it is a spontaneous project that does not necessarily need a name, unlike other projects organized in advance, in which first there is a concept connected to a title and then come the works. In this case we ended up giving a name to something that already existed.

C: As in a Colera infection, the fixing of monotypes has infected all of us, causing a profused and uncontrolled production of black prints, dirty and sticky.

R: Why this word? “Colera” does not make sense! I had proposed at least a hundred names better than “Colera”! “Colera” is a grim death name that appeals to Canemorto. It is not cool but “dark cool”. The only thing I like about it is that it reminds me of people with Colera and their blackened fingers. But that’s okay, “Colera” is fine.

C: In addition to the technical leitmotif of the works, will there be a thematic link between the works on display or will you be working freely, no strings attached?

C: We have no constraints, everyone will start with their own themes, and probably during the project we will move on to new ideas.

S: The topic of the works will be determined by the union and superposition of each one’s personal themes. Since we will be creating all works in the gallery, together and one on top of the other, we will inevitably influence each other and the final result will be an equation of all of us. We are the ingredients; the gallery is the melting pot. Boil it for two weeks and see what comes out. (I apologize for the food reference but I am hungry… hahaha.)

R: I know that there will be a lot of improvisation and beauty in what we will be doing. The great thing about this exhibition is that production will be impromptu. Everything will be decided work in progress.

B: I think we won’t know until we will start working and establishing a rapport between us. We are not people used to working at a distance and we really like to be present in what we do. Three years have passed since the last time we worked together, and many things have changed for us, both artistically and personally. We will need some time to get used to each other again and debate the research that each one of us is doing right now. From there on it will be easier to understand how to establish a dialogue between the works.

C: I wonder how we will avoid going crazy with you guys in the gallery for two weeks h24.

C: Your only hope for salvation is to start printing with us.

B: Instead I hope to make you crazy … hahaha. Just do not come in too often.

R: Stay calm and let us play. We cook, you sell.

S: I’m scared for myself… hahaha. 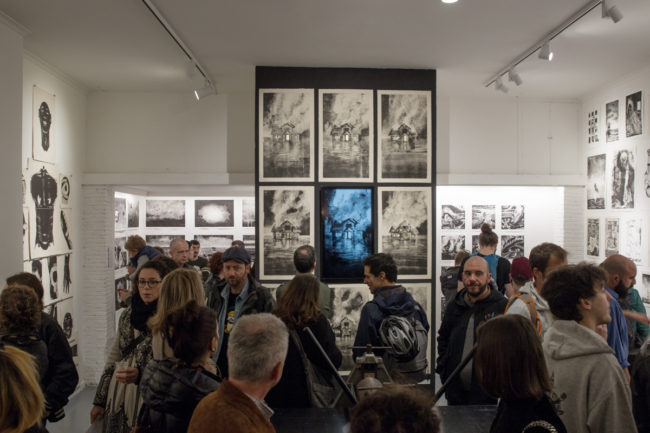