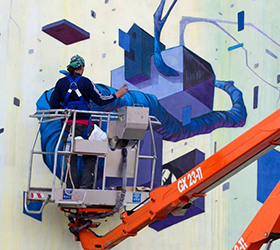 Born in 1972 in Stockholm (SW) Etnik currently lives and works in Turin, Italy.

Active since the early nineties in the first period of writing, Etnik immediately enters the writing movement through numerous appearances in art festivals around Europe.

Over the years his production has undergone countless evolutions and has reached its current aesthetics, in which lettering is only the starting point of his representation of urban agglomerations that evolve into 3D.
The artist sees the city as the theatre of his actions and as the subject of his art. The result is a production that mixes fantasy with a critical interpretation of big urban environments and their peculiar constructions.

In 2009 Etnik founded with Duke1 the group Bunker108, which currently cooperates with public administrations to organize various kinds of artistic events. In 2013 he exhibited his work at the MUBE in Sao Paulo (Brazil), which was followed by shows in Paris, Dusseldorf, Turin, San Francisco, Nice, Chicago, Monaco.

This is his first solo exhibition in Rome, where he displays the evolution of all his art from wall paintings, to wood constructions to sculpture.