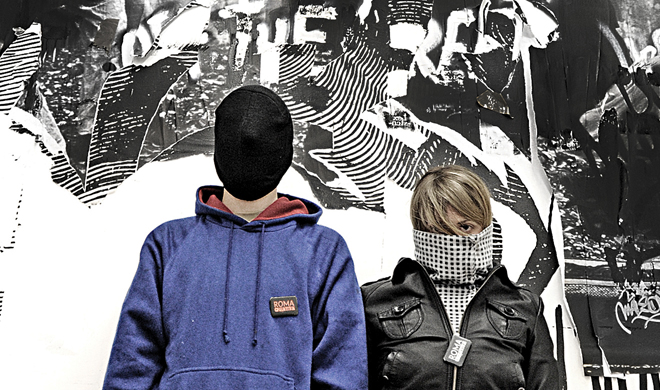 Sten (Rome, 1982) and Lex (Taranto, 1982) are among the most internationally renowned street artists in the world. The Italian duo has developed an unique technique, the halftone stencil, which allows them to create poetic and powerful pieces influenced by op-art. Sten and Lex first met at the end of medical studies in Rome, while taking a radiology course together. They were profoundly inspired by the material potential of x-ray film, and it was during class that they first began to cut out the skeletal forms, a process which foreshadowed their current practice.

Sten and Lex’s artistic careers began in 2001, when they produced their first figurative pieces, mainly portraits. Experimenting with the style and technique, Sten Lex developed a collection of silhouettes created from free hand cut outs drawn on paper and contained in glass, working with the idea of a “shadow-stencil”, the projection of an organic image, altered by the changing light. Their works on wood incorporates the evidence of the technique, the strips of paper that were previously discarded, now hang as part of the final work giving it an indisputable aesthetic element. The duo has revolutionized the technique by changing the status of the stencil from static to dynamic.