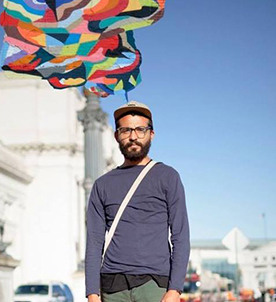 Nicolas Romero Escalada aka Ever was born in Buenos Aires (RA), where he currently resides. In the ends of 90s he became part of the graffiti scene of his city and then evolved creating a completely personal pictorial style. The artist prefers to dialogue himself in public spaces where he pursues a research that criticizes current reality and in which politics and philosophy merge.

Man is at the center of his works that portray the great characters of past history, but also common people or his family. Ever blends abstract and figurative images in bright colors for the consequences of his earlier beginnings with lettering graffiti . He investigates the human body in all its forms and possibilities, sometimes drawing this exercise to the extreme until it becomes a symbol and a message.

The artist’s inspiration derives from the cultural context of the places where he works, which become an essential part of his poetic style in a dialogue between past and present. For Nicolas the fact of intervening a common space is a political action, given that it is a collective space where all social entities are found. Saying something with the work in the public space does not change the world, but can change people, and these for him, are the only ones who can change the world.

In recent years he has participated to Public Art projects and festivals in South America, USA, Oceania and Europe, where he painted large murals.

He has done personal shows in several galleries such as Galeria Libertad, Queretaro (MEX) and Galeria Dinamica, Buenos Aires (RA) and has taken part in multiple collective exhibitions like the Museum of Contemporary Art of Cordoba, Argentina  where he presented works with different media such as painting, video, and performances, and created imposing and subversive installations.