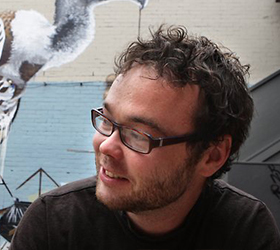 The Backwaters – Stories from endless suburbia (2016)

Born in Lismore (Australia), Fintan Magee moved to Brisbane as a child and began drawing shortly after. In his early teens he was exposed to Brisbane’s graffiti culture and began painting on walls.

Moving away from traditional graffiti in recent years, his large-scale murals often inhabit the isolated, abandoned and broken corners of the city. Mixing surreal and figurative imagery his paintings are deeply integrated with the urban environment; they explore themes of waste, consumption, loss and transition and contain a sentimentality and softness influenced by children’s books.

He has traveled extensively completing projects in Sydney, Melbourne, London, Vienna, Los Angeles, Miami, Atlanta, Bogota, Buenos Aires, Copenhagen, Moscow, New York, Oslo and Dublin amongst others. His diligence, technical skill and progressive approach to painting have solidified his reputation as one of the leading figures in Australia’s Street Art and Contemporary Mural movements.