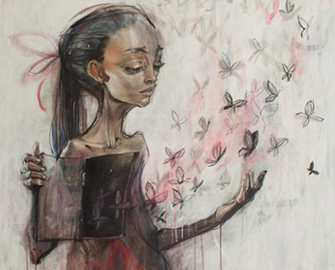 Galleria Varsi is pleased to invite you September 17th 2015 to the opening of Santa Miseria, the solo exhibition by the German duo Herakut, curators Marta Gargiulo and Massimo Scrocca.

Santa Miseria is a collection of thoughts and images that have marked and made unique the artists’ encounters with different individuals and their communities met during moments of deep sharing and exchange.

Herakut have travelled the world and have been entrusted with many personal stories, which have penetrated the artists’ spirit, generating the magic that animates their entire creative process.

Each individual is portrayed with the exact gaze and breath of the instant in which they narrate their experiences to the artists.

This powerful moment of interaction gives viewers the chance to feel the strength of those who in life have learned to move on, to overcome their difficulties and to start living again.

Santa Miseria sheds light on the human ability to resist and go forward; the artworks speak through the stories of those who have overcome desolation and have found the courage to look beyond, and also to think about a new future.

Herakut’s social involvement has made them known and appreciated at the widest international level. Their scrutiny extends to the dynamics of current events that affect the world: socio-cultural considerations which generate in the observer a much needed critical spirit that we often underestimate, caught as we all are in our daily frenzies.

Herakut testify the positive response of those who have been able to overcome dramatic events, and that have replied to the ugliness of their existence with a strong desire to live.

These people have not been won: with enormous strength they have learned to win.