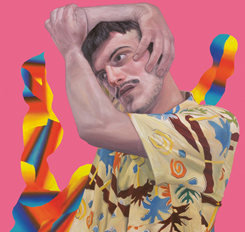 June 16, 2017, Galleria Varsi presents “Quiéreme“, a personal exhibition by the Argentine artist Nicolás Romero Escalada aka Ever, whose artistic journey stems from his need to express questions in public spaces and interact with collective thoughts. Ever first experienced the freedom of the streets when he began to do graffiti as a boy on the walls of Buenos Aires. His art then evolved into an original pictorial style (abstract and figurative) in color and contents, in which man is the key symbol.

Ever‘s art develops a close bond with the places where he works. It is in Rome that the artist has chosen to investigate the triad sacred-sex-individual, after his mesmerizing encounter with Bernini’s sculptural group: “The Ecstasy of Saint Teresa”, completed between 1647 and 1652.

One hundred years before Bernini’s masterpiece, Santa Teresa de Jesús, a mystic Carmelite nun, wrote on the appearance of an angel: “In ecstasy a beautiful angel appeared to me in flesh; in his hand I saw a long dart, golden and fiery. The angel hurled the dart which penetrated in my bowels, and when he withdrew it, it left me burning with love for God … […] Our Lord, my spouse, gave me such excesses of pleasure that I can add nothing except to say that my senses were raptured.”

In the quoted passage, the Saint describes “Transverberation,” a supernatural Christian ecstasy during which ecstatic individuals transcend their natural condition by the force of God’s attraction. Their heart is pierced by a sharp object, causing a “wound of love”. The soul elevates itself, to be intimately joined with God and participate in the mystery. “Ardent love” and “unmistakable pain” accompany this holy communion and cause movimientos en il natural, leaving indelible memory. It is precisely the pleasure described by Santa Teresa De Jesús that Bernini’s work asserts with courage.

Ecstatics assimilate this experience to rapture because Christian ecstasy is by definition spontaneous: it arrives suddenly and with impetus; it carries away the soul and neutralizes all human faculties, fully absorbed by the beloved object. Their bodies become witnesses to this encounter with the invisible, and are molded by its power. Ever questions the “elsewhere” that ecstatics come to know and imagine to have experienced. In this halo of light and darkness, the artist discovers that the tension men feel towards being uplifted is matched by God’s tendency to descend: the divine will to “penetrate man” finds its fulfillment in ecstasy. Man and God desire each other in unison and transgress their boundaries, surpassing their secure limits to enjoy absolute love while taking the risk of dying for this love.

The artist imagines a curious God that manifests Himself through the pleasures of the flesh to share them and free them from sin. It is in the enjoyment of this union that shared guilt dissolves: all is truth and love, for an instant fully accessible. “Quiéreme” interprets Transverberation in a contemporary key; it questions the tensions of modern man, and exhorts the spectator to “ex-sistere”. The artist transforms Galleria Varsi into an ecstatic, erotic and sacred, yet human, space. Men and women abducted by unknown entities populate artworks, forcing their bodies into stillness, waiting for their raptured soul to return.

The story of mysticism teaches us that ecstasy is never equal to itself. What would we find if we were to be seized from our natural borders? Who are these desired entities that occupy bodies, that men loves so much and by whom they want to be loved back?