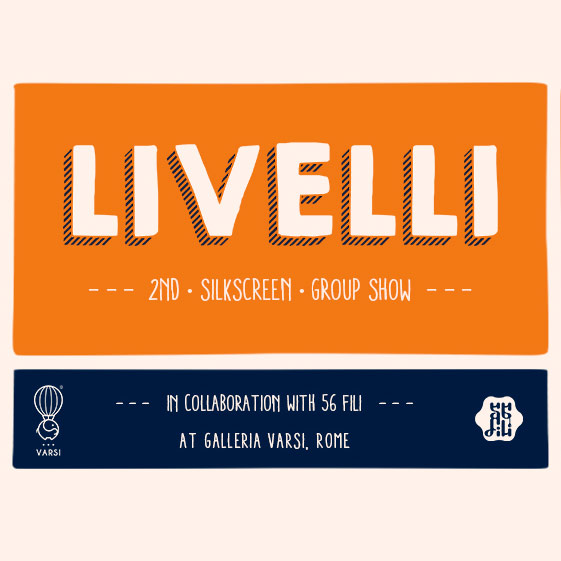 On January 21, 2017 Galleria Varsi will present Livelli, the second edition of the exhibition entirely dedicated to silkscreen printing. The project of the show stems from the desire to investigate an old printing technique which has played a major role in art history, and to experiment its possibilities.

In the past year the artists 2501, Alberonero, Alice Pasquini, Andreco, Aris, Borondo, Ciredz, Diamond, Eggs, Etnik, Francesco Barbieri, Giorgio Bartocci, Hitnes, Imos, Nelio, Nemco, Pakal, Sawe, Sbagliato, Sepe, Solo, Tellas, Vesod, Unga (BFC), have produced a silkscreen each in collaboration with the lab 56Fili, directed by Arturo Amitrano, a young Roman artisan who in recent years has made himself known for his creative and avant-garde spirit.

In Arturo’s vision, “chance” has an active role in all creative processes and becomes an artistic value of its own, as suggested by the name chosen for his lab: “A classic screen printing frame is composed of fifty-five threads; the fifty-sixth thread is the imperfection. This is where the name “56Fili” comes from. Understanding and mastering an error and making it productive is at the basis of my work. This is possible through technical know-how, knowing the rules to break them and undertaking empirical-experimental paths. My job is continuous research; in silkscreen printing you never stop learning … and being wrong!”

The twenty-four artists involved in Livelli have in common a strong link with public spaces, the sites for their favorite expressions and a source of constant inspiration.

The new works created for the exhibition are the product of the artists’ current research and the result of a dialogue between the languages of each artist and the silkscreen printing process that has allowed them to develop their own aesthetics each in their own singular way, exploring innovative formal possibilities.

All works denote the variety of technical solutions that silkscreen printing can offer and the different types of printable media, other than paper: from the classical art reproductions to bold color experiments, to a commingling of photochemicals and prints on silk and plexiglass.