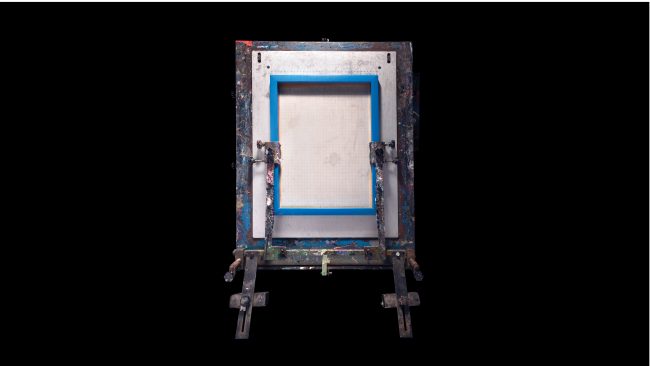 This year exhibition focuses on the technical possibilities of silkscreen printing which make the artworks emerge in a unique way; this is done by using media in a non-traditional way, bending them to each artist’s needs. A personal research has been carried out for all artists aimed at satisfying their different aesthetic needs, thus succeeding in obtaining original works that have been created directly during the silkscreen printing phase and not simply reproduced.

For this edition, 56Fili and Galleria Varsi, have chosen to invite five of the most important international urban artists: 108 (IT), Graphic Surgery (NL), Sten & Lex (IT), Tellas (IT), Zedz (NL), who worked within a year in the screen printing laboratory.

Arturo Amitrano, curator of the 56Fili project, has gone beyond the previous editions, investigating and encouraging artists to experiment on different media such as paper, textiles, plexiglass and lenticular film.

108– The artist has brought to silkscreen printing the same approach he uses in the creation of his other works. By working on different media, such as masking, freehand drawing on gloss coated paper, spray on typographic screens, he was able to reproduce on silkscreen what is usually done on canvas. Most of his production is based on the creation of diptychs where the traces left by color on the matrix of the first work become the base for the construction of the second one, generating a formal and material bond between them.

Graphic Surgery– The Dutch duo has created two productions, recalling a theme dear to their artistic research based on growth and reduction. From these concepts they have developed two series: Incrementand Decrement. In the first one the possibilities of silkscreen printing are expressed in six subjects, translated into eighty unique works, causing a multiplicity of variations on the same theme that differ in color and complexity of composition.

Sten & Lex– Internationally renowned for their use of stencil, the duo has worked on this project with a different type of media: lenticular film. This kind of film, normally used in advertising graphics, is here handled with the silkscreen printing technique, allowing the artists to experiment with original and innovative solutions and suggesting them new ideas and inputs based on the dynamic characteristics offered by this kind of material.

Tellas– For this project the Sardinian artist has chosen fabric as his media. Starting from neutral colors, he created various color gradients and subjects by gluing and sewing them on fabric scraps which combined generate the finished work. The different composition of the fabrics used by Tellas contribute to adding strength to the typical elements of his production, which here merge into a patchwork of colors, illustrations and shapes.

Zedz– Zedz’s serigraphic technique, used by the artist to create unique artworks, is developed starting from a single matrix in which, at each printing step, a single portion of the subject emerges through masks. His works differ by media type (paper and plexiglass) overlaid in compositions that can reach up to four layers. Important are his experiments on large formats, which are new to the previous silkscreen production of the artist.

Thanks to the collaboration of Alice Siesto and Matteo De Santis, the exhibition will be accompanied by video projections and audio perceptions that enhance its vision.

For this show, Libri Finti Clandestini (Milan) has created a series of twenty Artist Books made from waste material of the silkscreen production.