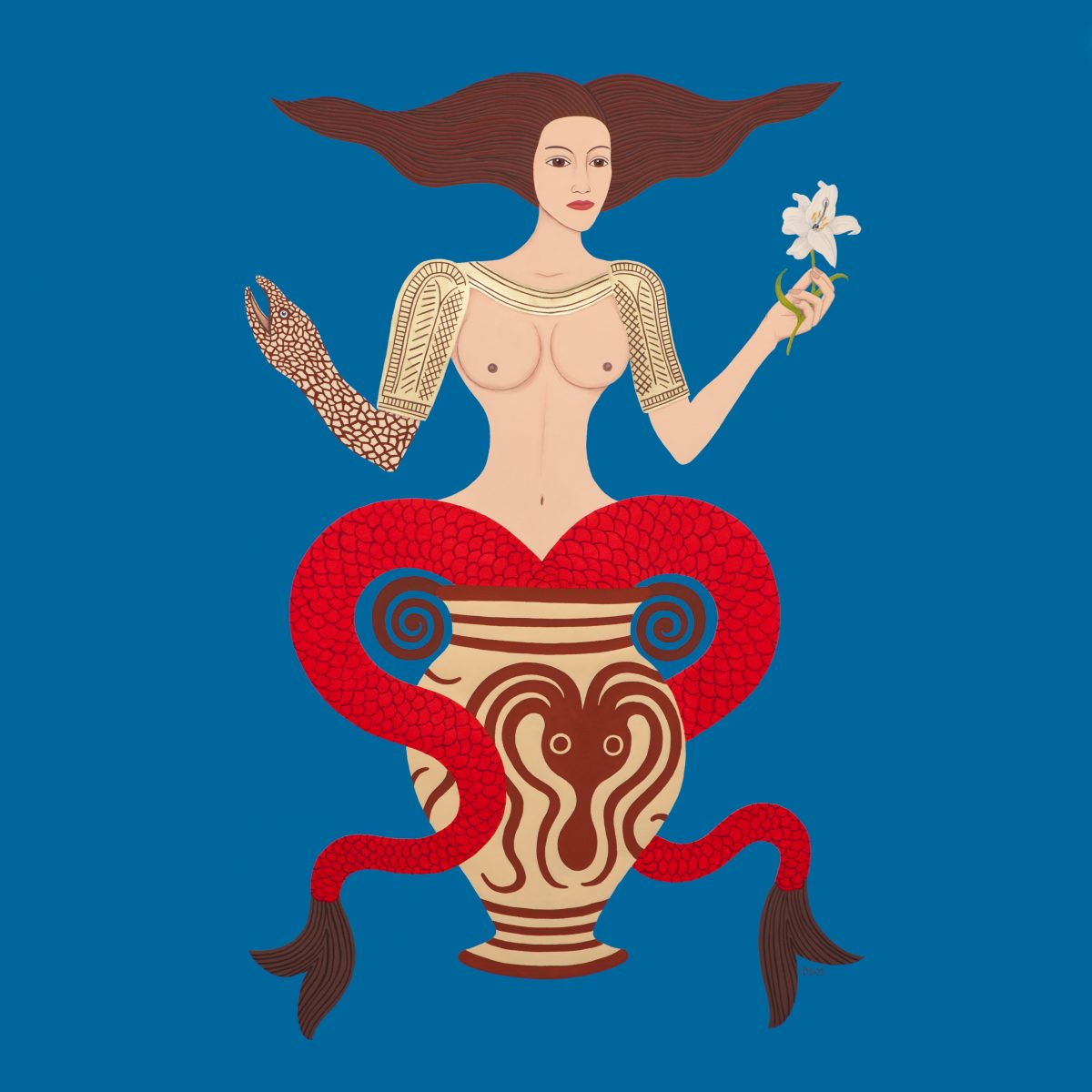 March 17th, 2018 Galleria Varsi presents “Eternal Little Goddess“, a solo show by Dem, an eclectic artist who was one of the first to develop in Italy a free and independent pictorial dialogue with architecture, starting from graffiti, then moving towards the representation of a symbolic and ancestral world, and then again to reflections on contemporary times.

Dem was born in Codogno, a town in the province of Lodi, where he currently resides. Since his childhood he feels estranged from his surroundings, with an instinct for deeper knowledge in a society that on the contrary rewards superficiality. Impatience and curiosity lead the boy to take refuge in a remote past, to study the beliefs, myths and cults of ancient civilizations. Through his research, he grasps precious teachings and values, which he questions and reworks in his art with different techniques.
The information acquired in books, documented by traveling all over the world and living his experiences, lead Dem to establish an increasingly intimate and vital contact with nature through which he develops his poetic message.
Art and study, especially in the anthropological field, become a means to escape and at the same time represent the possibility of “rediscovering” an ideal dimension aligned with his feelings, a sacred dimension where man is one with nature.

“Eternal Little Goddess” investigates the cult of the Mother Goddess, a primordial divinity that has always existed and generated symbols.
The exhibition is co-curated by Venexia, an independent publishing house, directed by Chiara Orlandini, an expert in this field, who in recent months has shared her knowledge with the artist by establishing a fruitful dialogue starting from three volumes she published: The Myth of the Goddess by Anne Baring and Jules Cashford, Guide to the Mother Goddess in Italy by Andrea Romanazzi and The Language of the Goddess by Marija Gimbutas, a milestone of archeomithology.
The Mother Goddess is the first archetype rooted in collective consciousness and is the synthesis of the cycle of existence, combining opposed principles that fully coexist in her: birth-death-rebirth; through her all things originate and are transformed, and she gives life and death, forever renewing all existence.
The myth of the Goddess dates back to the Paleolithic era and is continuously expressed in the successive ages by the civilizations of “Old Europe” and others around the world. Statuettes of female physiognomy, with similar attributes (accentuated breasts, abdomens, buttocks) are found in geographic areas very distant from each other and interpreted in a unique spiritual sense. It is precisely these artifacts that describe and transmit the logic of the Goddess and tell us about the divinities who embodied her principles: from Sumerian Inanna to Ishtar, from Egyptian Isis to Cybele up to the Virgin Mary. Vases, statuettes, places, rituals, all narrate how over time the myth has been transformed, according to the evolution of the species and the role played by women in the community, while maintaining unchanged its basic characteristics.

“Eternal Little Goddess” expresses the power of the Goddess and highlights the complementary bond that she once held with God, her “Son Lover”, a necessary link, today dramatically absent in Western religious culture.
The artist’s works in ink and acrylic and a series of ceramic sculptures, interpret the visual language of the Goddess, making her speak again. Female figures inspired by ancient icons populate the gallery and mix with natural elements; the Goddess is a snake, leaves, birds, or a cave in which to give birth, take refuge or die.
In balance, the masculine universe is defined in the surreal masks, typical of Dem’s production, sewn and embroidered by hand by the artist, with oriental and ordinary fabrics combined with organic materials, and shown in the exhibition through the photographs by Marta Zdulska . The masks are a reference to the mythological figures of Pan and Dionysus and express the vital, masculine, instinctive and “animal” life energy, an irrepressible energy that must come out, and which the Goddess needs to generate existence.

“Eternal Little Goddess” comes from a lack, a need. The Goddess cannot vanish, she is eternal. We need to rediscover and perceive her, and to reconnect with nature and with others, rediscovering the thread that binds us in the universal need to have (to want) a mother to protects us and for the mother to protect her child.