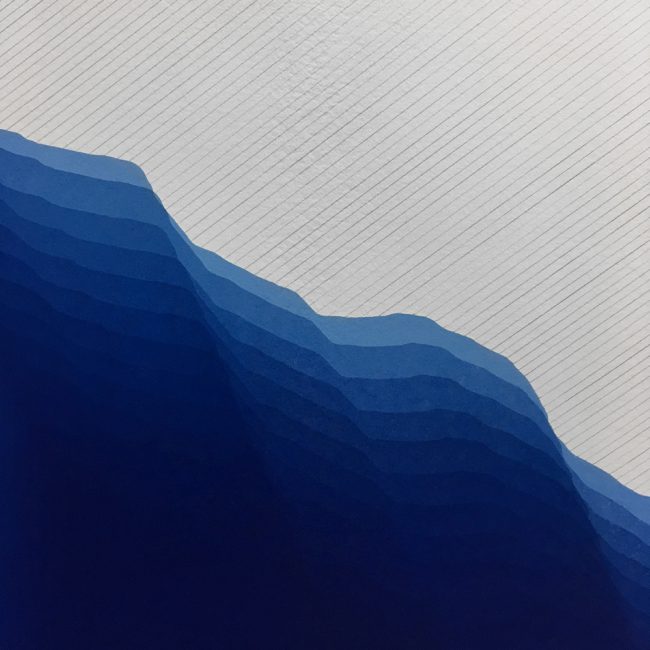 November 24th, 2017, Galleria Varsi presents Residui, a personal show by the Sardinian painter and sculptor Ciredz, focused on his research on landscapes. Ciredz grew up near the sea in the province of Cagliari, where nature is strong and almost brutal, and which requires one’s full surrender in order not suffer of its strength. Yellow, green and blue dominate the island, where winds blow violently, molding shapes and mixing tones. The graphic design of forms and chromatic progressions has thus become a constant in the artist’s work.

In time, Ciredz felt the need to develop an active relationship with his land, fascinated by its uninhabited spaces, fragments of desolate landscape where men’s traces tend to disappear, overwhelmed by the ever persistent nature. Hence his choice to paint small abstract interventions on uninhabited ruins in the countryside, which become “volumes” in the artist’s intimate dialogue with space. As Ciredz says: I love to think that those actions will be seen only by very few people.

Crucial to his activity is his move to Bologna, where he attends the Academy of Fine Arts and specializes in Graphic Arts. For the first time, he finds himself in permanent contact with an industrialized city. The regular presence of cement replaces his familiar rural elements, which survive only in hidden parts of the city. For Ciredz mural surfaces become a place for a shared and non-exclusive painting dialogue. The artist now expresses himself in public spaces, creating large-scale sections of nature on concrete sections. With his paintings he creates a symbolic relationship between the aesthetic components of the works and the surroundings in which they are placed; the same applies to his sculptures through his specific choice and combination of materials.

In the last years, the artist has consistently devoted himself to producing earth and concrete sculptures, sometimes also combined with artificial grass, which alter the perception of the spectator by changing their visual order. This is the Residui series, sections of matter that narrate the space relationship between man and nature. These works are the main focus of the exhibition, alongside a series of silkscreens and drawings, an essential technique in the artist’s production. The works presented at Galleria Varsi derive from the aesthetic investigation of a complex relationship that Ciredz does not judge but re-elaborates graphically through geometric shapes; his language is that of nature, mathematics.

The Residui show brings to the viewer’s attention the presence of a “Third Landscape”, a term coined in 2003 by Gilles Clément, landscapist, writer, entomologist and French agronomist, author of the Third Landscape Manifesto, a revolutionary text and a main reference in Ciredz’ formation.

Clément classifies as a Third Landscape those “undecided spaces” that are not subject to planning and human activity, united by being a biological “refuge for diversity”. Among these he identifies what is “left behind”, the object of Ciredz’ exhibition, abandoned places, the result of an exploitation that has occurred elsewhere. This Manifesto, political for certain aspects, is aimed at collective consciousness and highlights the importance of a combination of species, as an engine of transformation. The author proposes a new way of thinking about a landscape, in order to include its complexity. This is an unprecedented interpretation, far from the traditional landscape approach that identifies in design and intervention its cardinal principles. This essay, in contrast, emphasizes and exalts the value of things unproductive and incomplete, the ability to accept that which is “unorganized” can offer, the constant observation – a necessary assumption for action – as vital principles for man.
In Clément’s text Ciredz identifies eye-catching remains that tell a story, a sensitive look that seeks an origin and finds it in an uncertain fragment, “the space of the future”.