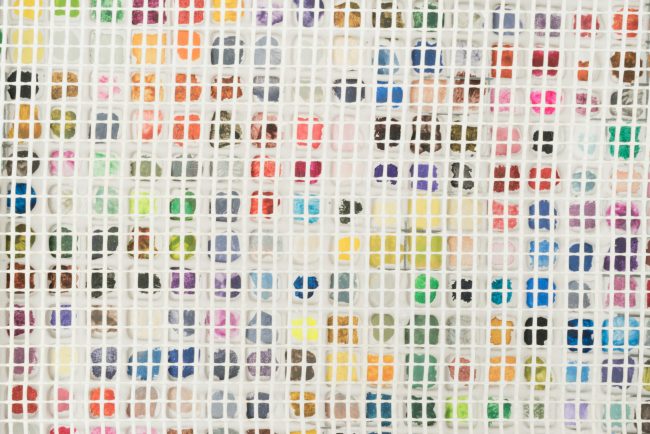 Galleria Varsi presents “Supernaturale”, a solo exhibition by Alberonero, painter, designer and sculptor from Lodi, born in 1991, who investigates the expressive possibilities of color and matter.

Alberonero’s research begins with letters, declined in public spaces as poems, and continues through graffiti, alternating an intimist dimension with a collective one. The experience of graffiti, lived within the Lodigiana scene, encourages him to practice painting in a free and childish manner and to consider playing games as an essential impulse of creation.

In 2012 Alberonero spray-painted a grid on the concrete wall of an abandoned factory, filling its squares with six colors. This instinctive action became one of the artist’s methodologies and at the same time the basis for reflections he carried out for several years and articulated in pictorial and sculptural works.

Since his beginnings, the artist has felt the need to translate things on a basic level and has found in squares and colors the representative codes capable of satisfying the urge for a synthesis that over time will meet his material experimentation and the specificity of the place of action.

The grid represents an ordered system, where tones can coexist in a rhythmic and continuous way, giving rise to sequences of colors that make the rigid net vibrate, and allow for out of focus emotions. The aim of explaining the world with a language external to logic elects Mathematics and Poetics as exponents of a “Supernatural” dimension, which dialogue together with color in the artist’s works.

During his studies at the Polytechnic of Milan, Alberonero expands his knowledge of different materials, which he translates in color, and approaches the experiences of the European modernist and radical Italian architecture, which educate his sensitivity and push him to (re ) think public spaced through a critical, reflective and prefigurative artistic action in its compositionns.

Adding color to architecture and nature becomes for Alberonero a process on how to interpret landscapes. His public art works are configured as sensorial stimuli able to amplify the perception and understanding of a place, and become acts aimed at participation and poetic (re) foundation of space.

If at first in the succession of color Alberonero seeks the universal laws of beauty, in “Supernatural” the tension towards absoluteness dissolves in favor of uncertainty, rediscovered as a visionary value, and embodied by the ambiguous nature of color.

Alberonero presents different techniques and materials, many of them related to architectural constructions, presenting a series of plastic works where wood, plaster, cement, fabric, metal, glass, acrylic, watercolor, mix, combine and are balanced by the relationship between tonality, matter and thought.

The grid bends and breaks, then returns rigid, in an alternation of metamorphic moods, which are born and destroyed, only to be consciously reborn.

The works on show are presented in progressive succession under the title of numbered “exercises”. The continuity between works is central and generates a movement towards an ideal.

Alberonero performs exercises of reduction to minimum terms, on one hand aimed at the search for free form and on the other at the search for instinct, identified in games, in the impossible dream of returning a child. Small utopias dot the space, romantic in their intentions to return to his origins and narrate the invisible.