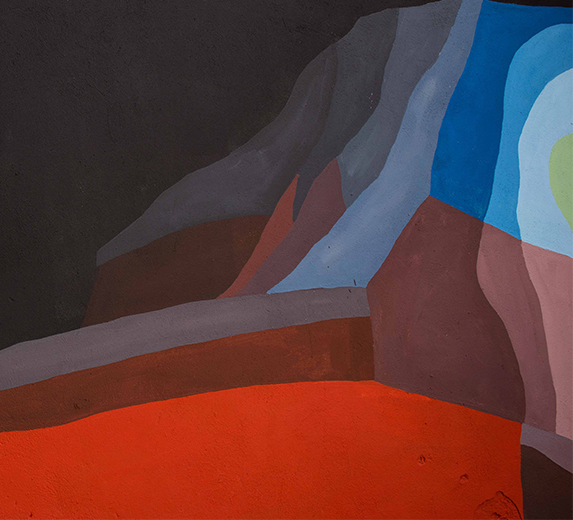 On February 18, 2017 Altrove Gallery and Galleria Varsi present Abstractism, a research project on Italian and European avant-garde murals exhibited in a group show.

Altrove was born in Catanzaro in 2014 with the aim of creating cultural contents in the region. The energies of the founders Vincenzo Costantino and Edoardo Suraci focused since the start on promoting murals in public areas with the specific intent of giving voice to a generation and investigating an authentic movement through a modern representation of the town.

The last two editions of the Altrove Festival involved artists motivated by the same values and united by having chosen the street as a place of expression of their thoughts and feelings and by a research whose roots lie in the abstract avant-garde movements.

A distinctive feature of the Festival was the strong desire to have the artists to meet in the capital of Calabria at the same time to work closely together, share experiences and stimulate valuable debates. 108, 2501, Alberonero, Alexey Luka, Aris, Giorgio Bartocci, Clemens Behr, Ciredz, CT, Ekta, Erosie, Graphic Surgery, Gue, Martina Merlini, Moneyless, Nelio, Domenico Romeo, Sbagliato, Sten Lex, Tellas, THTF were invited to create public works in synergy with the environment. In two years they have painted over forty murals in the city, which derive from an exchange of ideas between the history of the city and the different contemporary means of expression.

Boundaries between art and architecture, space and place, have become invisible; art has regained a central role in the creation of a cultural revival strategy in a land unaccustomed to digging deep in its roots, a land which now has gained the social mission of stimulating new ideas through unprecedented, consistent, public and widespread visual experiences, which touch urban spaces and natural landscapes.

In parallel to the work on Public Art, Altrove has also produced two collective exhibitions: Abstractism – Collective show, in 2015, and Abstractism Humanize Landscape, in 2016, where artists presented paintings and installations. For the first time the works created during the two years of the Altrove Festival will be reunited in the spaces of Galleria Varsi in an unprecedented collective show, a network of connections, abstract visions that generate questions and stimulate responses.The public will also see new works, plus video and photographic material collected over time to celebrate the entire project, its energy and effects.

Abstractism is a bridge between past and present, an open dialogue between contemporary artists and the art that has preceded them, which cannot be ignored but is represented in an innovative and spontaneous artistic manner to be extended globally. Altrove and Varsi’s research grasp the artistic spirit of our times; they share the continuous creative impulse imposed daily by the shared space, investigate its roots and boundaries and look at what lies beyond.

At the moment we can only assume, desire, and understand to create; it will be up to future generations to envisage our society as highly cultured with the awareness of the responsibility that comes from imposing images and art in the daily rhythm of life