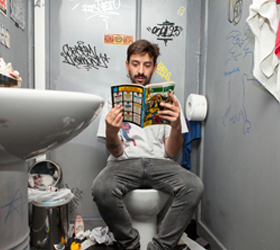 Solo born in Rome in 1982. His passion for art began in the early 90’s and in 2000 he approaches the movement of Street Art. In 2003 he attends the Academy of Fine Arts in Rome, where he graduated under the guidance of Michael Cossyro, publishing an anthology on the American artist Ronnie Cutrone, an important exponent of Pop Art. The anthology includes an exclusive video interview, made in 2008 in New York. In 2009 he worked in London at The Butchers videomaker studio, creating installations of video mapping. In 2011 he take part at live performance for the occasion of Viennart at the MACRO (Museum of ArteContemporanea of ​​Rome). In 2012 was the turn of the MACRO Pelanda with the ‘Affordable Art Fair’. In the same year he participated in several urban regeneration projects: in French city Vitry-sur-Seine (France), in Taormina (CT, Italy) and Ibiza (Spain). Solo continues his paintings on canvas and on the walls of several cities he cross. Superheroes, his main icon, once placed on the road are now transformed into images offered by the artist to the passers. In 2013 he flew from Paris to Prague, for a solo and group exhibitions, pointing its presence in every urban center.