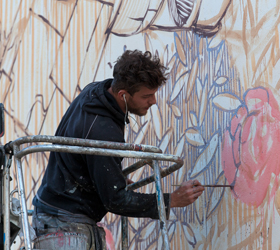 Pixelpancho was born in 1984 in Turin, where his grandfather, an amateur painter, introduced him to colour and form.

Pixelpancho’s passion for art and design led him to enrol in the Albertina Academy of Fine Arts in Turin, and then in the Academy of Fine Arts in Valencia, Spain, where he majored. During this period he became familiar with graffiti and street art and started using spray paint cans and markers on outdoor surfaces, quickly standing out from the classic paper and canvas media used by most other students. In his travels from his hometown of Turin to Valencia, Pixelpancho took every opportunity to make himself known on the streets. With the use of different mediums such as tile, wall painting and sticker/poster art, his work soon reached and decorated the walls of many European cities.

The time spent in Paris, Amsterdam, Warsaw, Vienna and other cities for graffiti jams and gallery exhibitions also allowed Pixelpancho’s style to evolve from the depiction of simple robot characters to the more complex compositions that characterize his art today.

The narrative in Pixelpancho‘s work is driven by a forgotten world sitting under a blanket of dust. In his universe, broken and dented robots are found decaying on the ground, their iron and rusted copper bodies falling and laying about as if discarded into oblivion. Although the scale of his work varies, his surreal realm is the constant thread that pierces through contemporary and historical references. The strength of the physical dimension and of the gestures that humanize his robots are particularly noticeable on the walls of abandoned buildings in cities throughout Europe, the U.S. and Mexico, and are all part of an interconnected structure of stories, as in all of his murals, paintings, and sculptures.