15% OFF ON ALL PRODUCTS + FREE SHIPPING 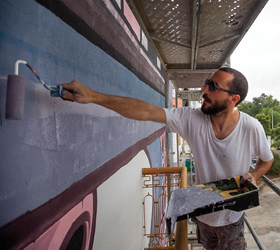 Mr.Thoms Born in Rome in 1979, before studying graphic and then painting at the Academy of Fine Arts in Rome. From 2000 he worked as a set designer for film and theater; at the same time as an illustrator creates animations for film and television. In recent months he has worked on the sets for the ceremonies Olympic sized Sochi in Russia. In 1996 he approached the scene of Writing, only to become one of the protagonists. A multifaceted artist dedicated himself to painting, to sculpture, without abandoning the passion for graphics. Enter the museum circuit and no gallery, participates in Festival of Writing and Street Art, creates walls in Italy, Denmark, California, Portugal and Spain.

Sign up for our newsletter to stay informed on exhibitions, events, promotions and more