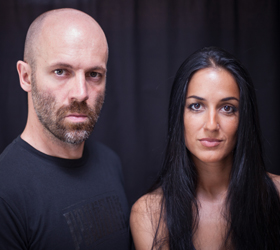 Hera, Jasmin Siddiqui, was born in 1981 in Frankfurt, Germany. She studied Visual Communication / Graphic Design at the University of Applied Sciences in Wiesbaden. She entered the graffiti scene in 2000.

Akut, Falk Lehmann, was born in 1977 in Schmalkalden, Germany. He studied Visual Communication / Graphic Design at the Bauhaus University in Weimar. He entered the graffiti scene in 1991.

Hera and Akut, have joined their creative forces in 2004 when they started working together under the name Herakut.

Herakut’s paintings are sensual and wild; technically they offer an outstanding creative dualism.

Akut’s photorealistic details blend in with Hera’s more gestural strokes in canvases that articulate stories of triumph and discomfort. All are enriched by the presence of texts, which allow viewers to immediately enter the narrative.

Their artworks are present in the major cities around the world, from Toronto to Kathmandu, from San Francisco to Melbourne. Today they arrive in Rome for their first solo exhibition in Italy.