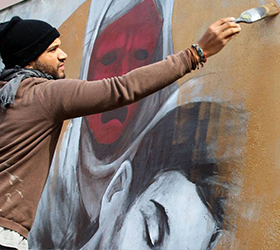 Evoca1 was born in the Dominican Republic where he spent much of his childhood drawing on walls and playing baseball until he was eleven years old and his family decided to move to Hollywood, Florida. His art education developed independently as an autodidact through a compulsive study of the great masters of art history, their masterpieces and techniques. Painting is a central theme in Evoca1’s life: he began painting as a child focusing on the many ways to represent human beings. His works describe his vision of life through evocative metaphors where children, men, women and animals are symbols of his personal history and of social struggles.

He currently lives and works out of South Florida, where he continues to develop his craft and his research in the field of figurative painting. In recent years this mainly happened in public spaces where he painted large works. His interaction with the local environments has been essential in generating the concept of his work. He has participated in public art projects around the world, leaving a mark in Peru, Austria, Canada, Florida, Argentina, Germany, Mexico, Honolulu, Tunisia, Italy, Iceland and many other countries. His works have been exhibited in numerous exhibition spaces including the StolenSpace Gallery (London, UK), the Jonathan LeVine Gallery (New York, USA), the ABV Gallery (Georgia, ATL) and Perez Art Museum Miami (PAMM) (Miami, Florida).