C: When I first asked you how your artistic career began, you answered: “From trauma and poetry”. What was your first approach to art?

A: At the age of fourteen, I needed to represent what I felt day and night. Art is a moment of freedom and manifestation of thought; I did what was going through my head; sometimes it was drawing, others it was writing.

C: From working alone you moved on to being part of a group. Your participation to “Movimento Sinapsi”, a group in the Lodi graffiti scene, played an important role. What came out of your experience with graffiti?

A: Energy, adrenaline and pleasure. Making graffiti with other people is one of the things I love most; even today when I come home and I have free time, I go to the countryside to draw and spend time in abandoned places. The land where I was born and raised has a strong link with my work; the fog, the river, the factories and the farms are the natural and architectural subjects of the place. The charm of empty places, of the light that flows in and makes them come alive again, the silence that runs through them, and also their brutality, which after years has become one of the references of my research. The experience of folklore graffiti as a playful act, instinctive forms with dirty and brutal traits, and a link with the rural world far from the city have led Lodi to host a radically different writing scene from the Milanese one. 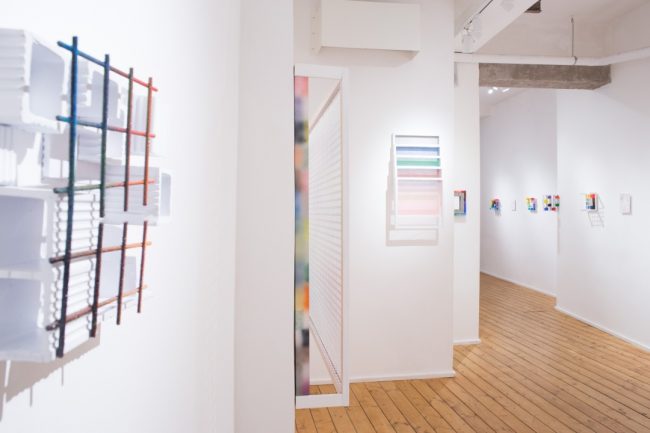 C: In 2010 you enrolled at the Politecnico di Milano, where you graduated in Interior Design. What studies have influenced you most?

A: My university education was fundamental for the development of my vision on places and on the relationship between human kind and architecture. By combining art in the street with studies at the Politecnico di Milano, I started perceiving a new kind of space. I remember with pleasure my drawing lessons where I had to slow down the imagination to concentrate on lines that represented invisible details. The history of design and the study of the Bauhaus are what influenced the most my way of thinking. Finding a methodology in the construction of what I was drawing and studying was a unique step to channel the energy that I felt through free expression on the street.

C: You told me that there was a time when you felt the need to minimize external stimulus. You did a daily exercise in “reduction” to try to get to the essence of what was around you that led you to a synthesis of color and to squares. What do these two elements represent for you?

A: In 2012, I started working on reducing what I saw. This new vision made me feel like a child again, one input at a time, a continuous emotion. This exercise needs a balance between finding a code that satisfies you and feeling its novelty each time, which means experiencing amazement and feeding its magic.
Color has always been a feeling that I wanted to make mine. I love the colors of life and what they can make you feel. I approached its study in an obsessive way when I decided that it was the key to making such a research understandable to all. Its goal was to arouse pure emotions in the observer, without giving the coordinates of precise and definable figures, but offering everyone the opportunity to interpret what they were seeing within an apparently static system. Through color I managed to bring life to what I wanted to represent, to make the eye run along the patterns of my mind.
The shape of the square represents a moment in my vision, its smallest and most indivisible part, its unity. I observed everything in two-dimensions and divided it through a grid – the grid as a basis for a new vision, the chessboard as an element of total balance. The square represents the “non-shape”, the only one that allowed me to put more colors in sequence without ever detaching them, the only drawing direction I saw possible.

C: You have defined your “mathematical-perceptive” artistic process. How do poetic and mathematics combine in your works?

A: I want to study the perception of what we look at and the emotions it inspires: the vibration of the eyes on the multitude of phenomena that appear, and the process of manifestation from the invisible to the visible. Also, finding perceptions of color in a physical space and transporting them through imagination to a real act. In these years, the bridge between mathematics and poetics has been color. A scientific and continuous approach has allowed me to develop an intimate bond with its essence and the production of different personal color models, through years of training to achieve any color, looking for their roots within real variables, that is taking inspiration directly from what I see, such as the exercise of color detection on Photoshop. This practice of creating color in my works always starts from the three primary colors, plus white and black. The other fundamental component for a mathematical reading of places, and its consequent transformation, is the analysis of space, where every element in the scene represents a possible variant of interaction with the module.
Mathematics of space through the study of architectural polychromy.

C: What feelings do you want to inspire with your works? Speaking of color theory, do you think there are universal laws on color perception?

A: I would like to bring about white, light, everything. I have always wanted the viewers to look at my work with a sense of elegance and lightness, as if they were breathing in new air. My vision is a research for objective beauty, studying the systems close to knowledge and to the discovery of visual pleasure. A scientific art in which the aesthetic component is the mathematics of color, a technique that leads me to experience real colors within the spaces we live in. I think everyone has a very personal perception of what they see, but I believe that there are aesthetic combinations that bring beauty closer than others.

C: The study of the relationships between art and public spaces has always been central to your research. Over time your intentions have evolved. Today you are oriented towards an artistic approach aimed at “building the landscape”. How can color “develop”, “build” a space?

A: Designing architecture is not designing a wall. My challenge is building new environments through the perception of painting, using color as the only emotional key – a sort of building with painting. Thinking as a designer, I always thought of drawing as one of the steps of my creation, without immediately identifying the final solution. By amplifying the perception of visible characters, one can generate a place that is apparently not seen.
I prefer lines and pure shapes; as for colors I instead tend to experiment all possible variations of shades altering their purity. What results from the union of line and color perfectly adapts to the changing nature of the landscape where my works are placed, where the alternation of static and dynamic, empty and full, opacity and transparency is also evident. Living the landscape, halting the vision in single moments that allow us to read and interpret the rules that regulate it, and then later work on a creative process that gives it a new shape. 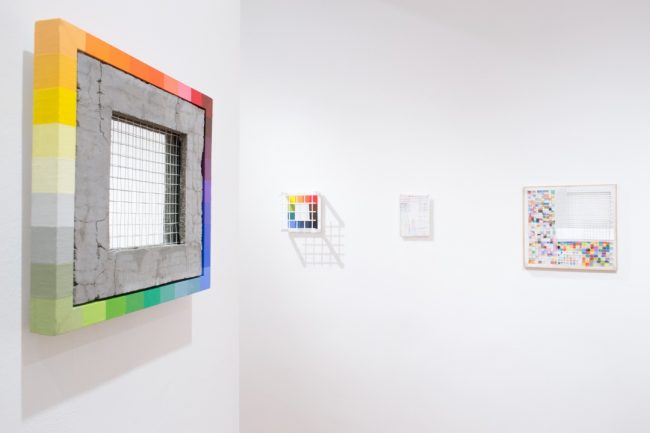 C: Nature has been the scenario for most of your projects; natural landscape has always been a source of inspiration for you, especially in terms of color and place of action. How do you fit your art in places so perfect, complete?

A: In 2013, at the end of my studies at the Polytechnic, I started to produce installations; I felt the need to bring in volume to what I was drawing. The industrial and architectural approach led me to develop sensitivity to the use of certain materials and their combination in public spaces. My immediate desire was to create places that would generate a tribute to nature; environments that could make man contemplate spiritual spaces for a new vision. In these works built in various environments, my goal has always been to bring forth what already existed without eroding or distorting their roots, but reflecting on the livelihood of human beings and where they live, an architectural addition to find a balance with their surroundings. Within this vision, I define “construction of landscapes” an act of construction functional to the place where they live, an architectural object that comes to life together with the scenario in which they give birth, live and die. This process forms a landscape aligned to its natural course, inviting it to take paths that lead to object-space interactions, which are supernatural and which reveal its essence through new devices that show the image of a hypothetical and superior nature.
Accompanying those moments where nature reveals its absolute beauty is an action I love to do, working on invisible laws that link the natural cycle of the day to visual systems that can enhance it, through the use of temporary devices that do not affect the laws of environmental impact.

C: In your personal exhibition you will present a series of works characterized by a strong playfulness, made with different materials, a series of “Exercises”. What is the relationship between color, playing and matter in the works created for “Supernaturale”?

A: The exhibition stems from the desire to create playful devices that produce models of vision. The production begins with an act of liberation of thought, uniting my mind to the life of the works and provoking the birth of unstable, fragile and pure emotions and artifacts. The development of “thought objects” does not have a definite end but lives on unpredictable states of mind that repeatedly change their shape until a limit vision is reached, defined as the final state of that form. Visual artifacts are made with matter composed in a balance between instinct and geometry. This process is similar to the creation of a random game where color and matter define unexpected shapes searching for infinite possibilities on the development of a scientific and unique design. The analysis of materials, the creation of colors and the shape of matter are a natural evolution of the works; what is “Supernatural” is the juxtaposition of a pure and luminous spirit on the raw and geometric material. The exhibition is characterized by a continuous alternation of different possibilities which occur when different materials meet, such as in the case of wood, glass, metal, plaster, cement, fabric, fiberglass, resin, together with the study of their interaction with color. 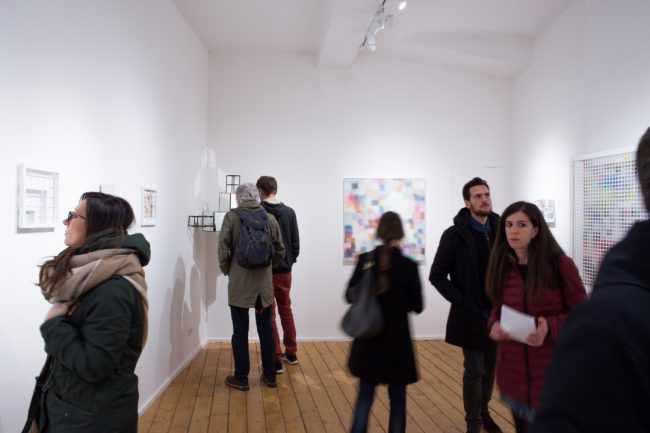