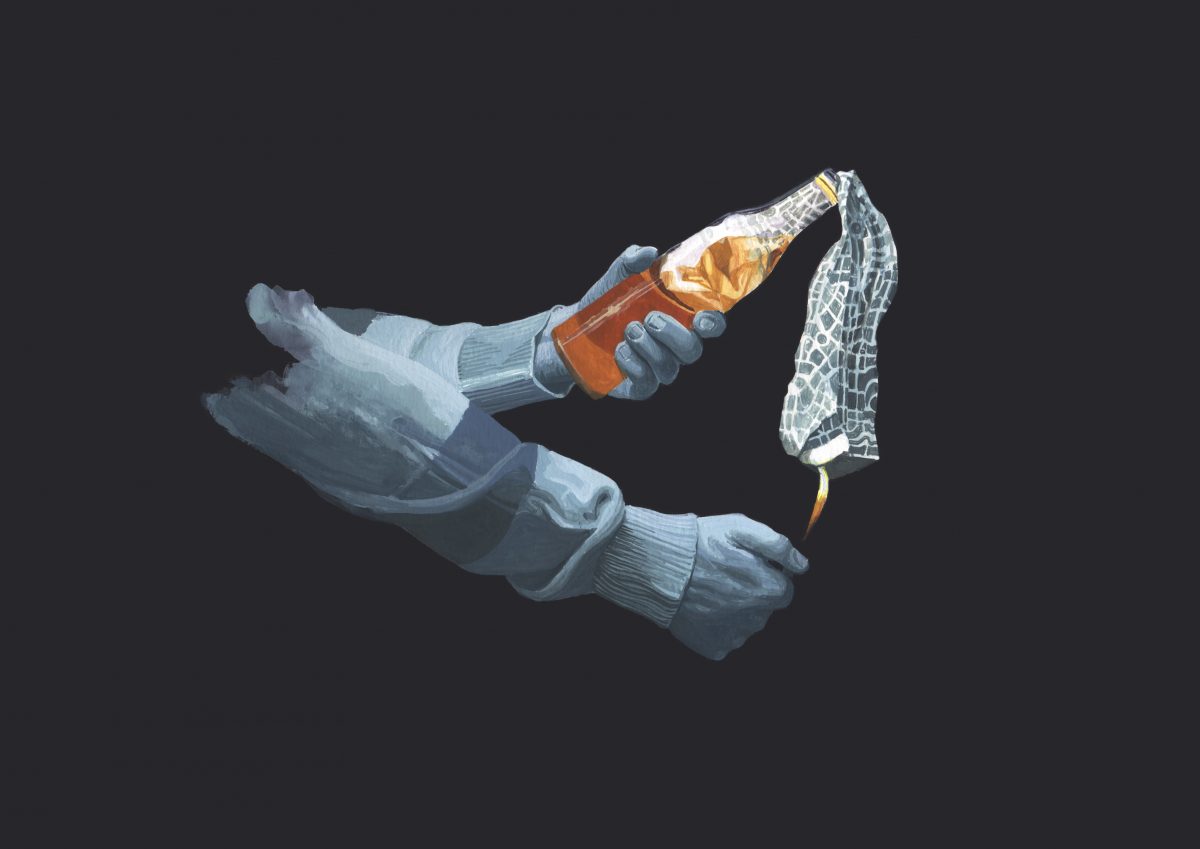 Muñoz‘s artistic path reflects his desire to investigate the collective dimension of public spaces, and to interact with each specific location, always aware of the complexity and the contradictions of artistic interventions in public sites. In the Nineties, as a boy, he starts by doing graffiti, and immediately understands that it is the openness of the street that allows artists to express themselves somewhere between freedom and risk, play and protest. Later on, he develops further intuitions that give room to more mature communications with viewers, an ephemeral dialogue whose caducity becomes part of his poetics. As he starts interacting with his viewers in his home country, Muñoz paints thoughts on walls that turn into conversations. His Public Art becomes a bridge between himself and the world, a free and open exchange that creates intellectual connections and severs ties with daily images.
Muñoz’ aesthetics can be found in his drawings, an intimate and spontaneous technique – his first language – which elevates his research and applies its results to a critique of reality.

“Vexillum Transparent” is a reflection on human beings on the move, on the meaning and on the consequences of this movement on society, on us and on the needs that make us want to cross our national borders. But do these borders, which are also points of encounter and of conflict, really contain “something”? Can there be identity without differences?
Travel is inherent to the history of human beings, since the earliest and most primitive ages when people left their original environment for a variety of reasons: the fulfillment of vital needs, communication between distant centers, territorial expansion, exploration and socio-economic or environmental problems, but also cultural or religious reasons, such as pilgrimages to places of worship. Travel is also a pastime, a diversion to occupy free time in a playful way. This recreational factor characterizes the modern mass tourism phenomenon which exploded in the middle of the 20th Century.
Mobility can be considered one of the first differentiating factors amongst individuals in our millennium; it widens or limits possibilities, causing a net gap. Do we travel driven by personal desires or by boredom; are we looking for a real experience with meaningful exchanges and new knowledge, or maybe just fleeting evasions and consumptions?

At Galleria Varsi, Muñoz investigates the most significant movement of human beings of our era, generating a series of questions. Does tourism correspond to an invasion or is it a step forward? What consequences does the tourist experience have on the world? Are there places still able to generate meanings? And what meanings can we activate when encountering others and other places?
The artist presents a series of new paintings, drawings, silkscreens and a site-specific installation where the weapons of military struggles blend in with the iconography of Classical Art and with ordinary objects, in a saturation of symbols. In the works there are images and concepts that if approached carefully, take on new connotations and produce infinite other ones.
Muñoz imagines a demonstration of tourists who seem to rebel against the nature of their paradoxical condition.

The banner, the symbol of identity par excellence, is stripped of signs and colors to narrate today’s social fabric and the plot of contradictions which tourists must untangle and which ironically make them complex and ambiguous.
The title of the exhibition: “Transparent Flag” symbolizes the oxymoron shared by what is global and local, the crisis of space (excessive and empty) and identity (fluid).
Can a collective identity manifest itself in a transparent flag?
Sites seem to have lost their peculiar characteristics, and seem to match many others with hardly any relevant information. What will tourists of the future look for and find if not a site? Will they perhaps find themselves at the end of the story?