Home Exhibitions SLEEPING THROUGH THE WAR
Skip to content

SLEEPING THROUGH THE WAR - SEPE 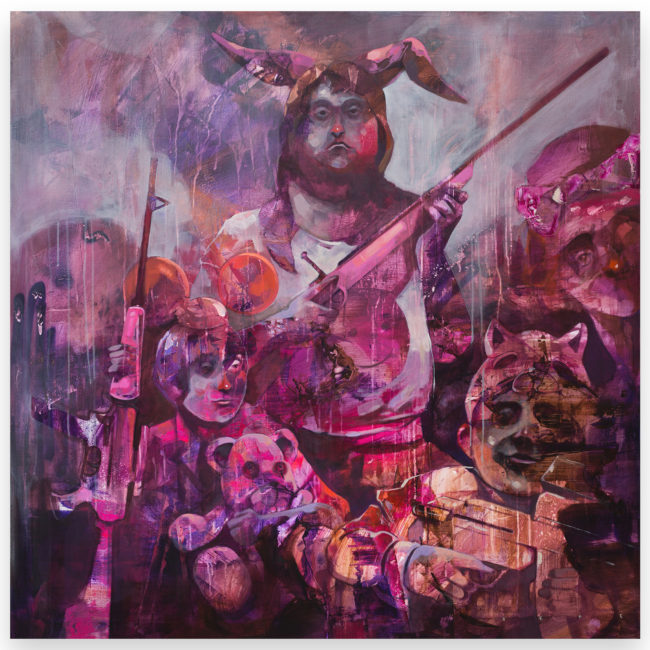 On September 29th 2017 Galleria Varsi is proud to open its new spaces in Via di Grotta Pinta 38 and to inaugurate “Sleeping Through The War”, a solo show by the artist Sepe, a major figure in the Polish Urban Art scene.

“Sleeping Through The War” collects reflections from some of Sepe‘s art travels, during which his interaction with local cultures have led him to ponder upon the nature of war.

The works created for the exhibition are a “visual reportage”, real-life reactions translated into oniric imagery, where chaos and logic paradoxically coexist.

The artist remembers in particular a sunny Sunday afternoon a year ago on the Red Square in Moscow where he was intrigued by a leaflet describing a “Family Picnic”. There he found an unexpected scenario: no balloons or sweets but dozens of children in military uniform that were teaching other children inside a series of tents on “how to make war”, real war. Pistols, Kalashnikov, precision rifles and authentic weapons of all kinds were casually being handled by very young people training their peers in combat, under the encouraging eyes of their families.

In Russia, there are widespread patriotic military organizations for children and adolescents; these include IunArmia (from the Russian Iunost, youth, and Armia, Army) founded in 2016 by the current Russian Minister of Defense Sergei Kužugetovič Šojgu, an organization already operational in more than eighty Russian regions and growing exponentially, a real “army of children” structured in various detachments (paratroopers, aviators, tankers …), specifically created to instruct young people to war.

“Sleeping Through The War” stems from this brutish and crazy anecdote.

Galleria Varsi is a Theater of the Absurd that welcomes artists at the margin of an estranged and unstable society, caged by media, where war becomes a product to be distributed. According to Sepe, “the increasingly vivid and disturbing ‘rhetoric of war’ is present not only in the world of politics and the media, but also in social life – closer and closer to us. War is the most profitable and cynical business and death is the hottest, media selling news. Violence and ignorance are an attractive, bestseller element of pop culture, while guns are stylish, fancy gadgets – an entertainment symbol.”

The conflict is clear in the contradictions that invade his characters. Men, women and children participate to the show of violence, alienated and desolate, lost in the masses and dominated by senseless forces. “Sleeping Through The War” is an extravagant, cruel, ironic and dramatic mirror in which the viewers reflect themselves and are forced to reflect.