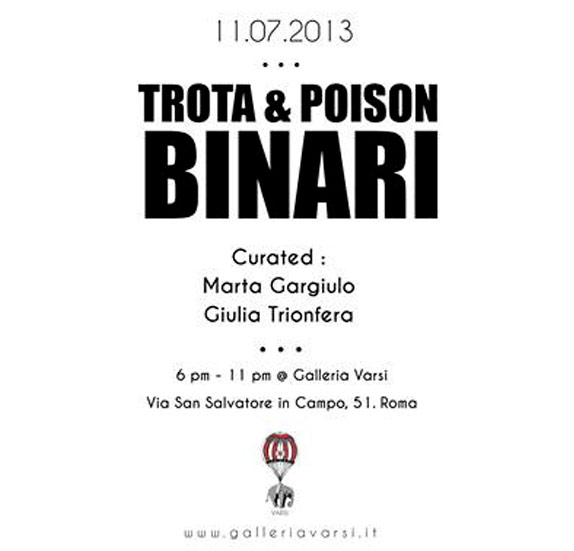 Varsi gallery back to celebrate Writing with Poison (Howen) and Trota, two big personalities representing the birth, the evolution and the continuing story of the graffiti made in Italy in the world. Both active in TDS, New York crew, one of the most famous and long-lived, in which also take part Skeme (NY) with whom last May they took part in a Jam in one of the most important locations in Rome: Tuscolana Station. They start their path that was born during raids between tracks, warehouses, on the long line, on city walls and now after twenty years of primitive and grotesque actions, involuntarily and without realizing that it will became a piece of history of a movement: the Writing. Two hands that with the spray achieve an unmistakable style, while maintaining opposite attitudes of life.

Trota today, after touring most of the world, has joined several celebrated crew establishing International relationships, many of these are present on texts dedicated to writing and documentaries made on the motion. The crew of his life is without doubt THE. This crew have a very strong team spirit, which distinguishes its work in the city.

Poison is a lonely spirit who loves to act in the spaces which over the years he has chosen as places for his art. Its territory is the beloved Roman yard, who sow his path from the beginning and have followed the evolution that brought his name on a countless number of wagons, about 700 pieces traveling on the tracks.

The exhibition TRACKS comes out from the desire to narrate through a careful documentation the signs and spaces that have made unique the career of these artists from the time of lawlessness until today with public assignments. The exhibition is a survey on the setting of the graffiti in the city life, on its impetuous nature and its technique. The presence of the two artist triggered a black out on the old urban aesthetics, in the name of a new one, based on urban retaliation, embraced by writers and built on the idea to bomb the city with letters. Poison and Trota are two fundamental writers  and their practical lives without limits.