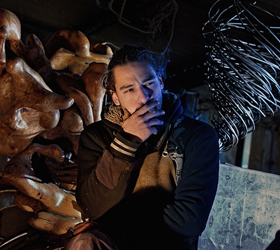 Jacopo Mandich was born in Rome in 1979.

In 2005 he graduated in sculpture at the Accademia di Belle Arti in Rome, with a thesis on art, recycling and magic. In the same year he won the Edgardo Manucci competition and in 2006 the Manucci Museum hosted his solo exhibition which he later on brought to the Rotary Club in Milan.

The artist’s stylistic research is in continuous evolution and is centred on a choice of materials based on iron, wood and stone.

Mandich’s artistic experiments are an ongoing challenge, based on the desire to mould complex materials to bestow them emotional and sensory contents.

His works have been exhibited in Paris, in London and in several Italian cities, including Rome where in 2014 Galleria Varsi presented his solo exhibition “Cosmogonie”, He has also carried out exhibition projects in institutional spaces such as the Auditorium Parco della Musica and the Museum of the Imperial Forums, organized by the Italian Ministry of Culture.

In 2015 Mandich participated to the Third Industrial Biennale of Contemporary Art in Ekaterinburg, Russia, and created a permanent installation in the city of Satka.